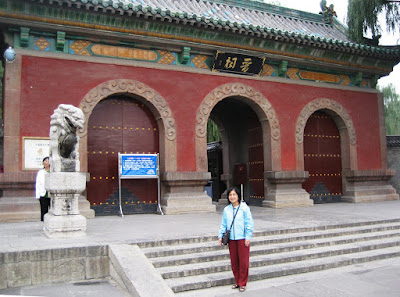 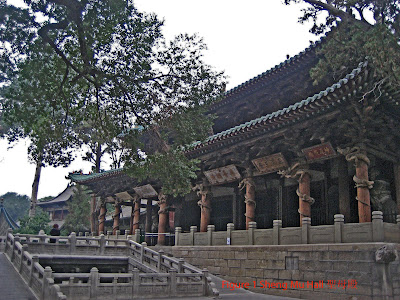 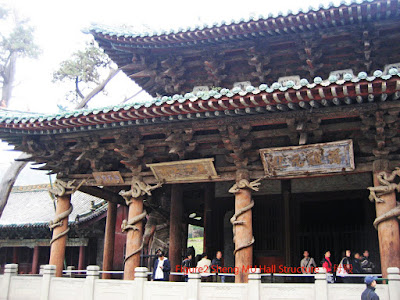 History:
This compound（Figure 0）in present day Shan Xi Province was built as a memorial hall to honor a 1050BC Zhou dynasty high official Shu Yu who was a son of Emperor, Zhou Wu Wang. (See Foot Note) He developed the irrigation system in this area some three thousand years ago. As a result, this area became the most prosperous region in ancient China. People living in this area built this temple compound to commemorate Shu Yu who laid the foundation for prosperity for generations to come. Although the written record of this memorial temple (not a Buddhist temple) can be traced back to the 5th century。 The main hall Sheng Mu Hall (Holy Mother Hall) and the bridge in front of it were rebuilt in 11th century during Song Dynasty. Other buildings were built or rebuilt in later period. Therefore, the mix of styles recalls the evolution of aesthetics in Chinese architecture.
The premises were beautifully laid out. There are cannels, springs, bridges, tall cedar trees, and the well preserved wooden halls. The waters and the trees, in particular, soften the solemn atmosphere, and make it feel approachable and humane. It is a very enjoyable place to stroll around.
The following description of the compound reverses the order of what a visitor may proceed from the entrance. We start from the main hall and work our way down to the Shui Jing Hall near the entrance.
歷史
山西太原附近的晉祠 （圖0）是紀念周武王的兒子唐叔虞的。他被封在當時稱為唐的山西，他利用晉水，大興水利，造就這地區成為富庶之鄉。人們就造了晉祠來紀念他。這祠始建年代雖然不可考， 但是5世紀的水經註已經有晉祠的描述。 現在祠園中最早的建築物是11世紀宋代造的。其他的建築有遼金和明代造的。
整個祠園的佈置非常美觀。 祠殿間配合泉，渠，橋，加上蒼然的古樹，肅穆中夾著秀麗，令人徘徊留連。
我們的描述將從本殿-聖母殿開始，反其道地往入口走，欣賞中軸臨近的建築和庭園。


The Sheng Mu( Holy Mother) Hall
Since there was no clear historical record, the identity of “holy mother” that this main hall was to honor is not clear. The general consensus is that it honors the mother of Shu Yu, or wife of Emperor Zhou Wu Wang. Her name was Yi-Jiang. She was said to be one of the ten most capable people who helped her husband conquered the surrounding warlords, and established the empire.
The present hall (Figure 1) was built in 11th century during Song Dynasty. This beautiful 62 feet high hall has royally 7 bays. The roof has double layers giving it a much more substantial look than the Tang era single layer roof as seen previously in Fo Guang Temple. A better understanding of the structural requirements reduced the size of the corbel brackets, relative to those of Tang buildings. The columns and the building have a more slender and tall look. The most remarkable feature of this building is that there is no column inside the hall, giving the interior an expansive feel. This was achieved by a complex wooden truss system that supports the heavy roof, as can be partially seen in Figure 2. The exterior columns were originally bare without these dragons. The beautifully carved dragons as seen in the pictures were added in Ming or Qing dynasty. They are not overly decorative as many of the stone carved columns of late Qing dynasty are. Aesthetically, they integrate with the rest of the structure well.

Foot Note: Zhou Wu Wang was the second emperor of Zhou Dynasty (11th Century BC to 3rd Century BC). He and his brother Zhou Gong defined the social order, and the corresponding rituals that had been followed by the succeeding Chinese dynasties for 3000 years. They are the most influential figures in the history.